Urban Agenda is a communication forum for urbanism in Ireland

When travelling the Irish countryside, it is not unusual nowadays to come upon a car showroom in a pastoral setting, apartments in fields on country roads, and other arguably instant indicators of the Irish urban condition. It has been suggested that the island is now so urban that most of us expect to be able to buy a good Latte within 15 minutes driving, wherever we are. How this aspiration will fit with the Core Strategy and settlement hierarchy intentions of our legislators remains to be seen, but the gradations of urban, and some of the facts of the occurrence of the current and historic urban condition, are of interest.

The history of what has been urban on the island is a fascinating area, one which still seems open for examination and investigation at many scales. An ISUF Paper by Loughlin Kealy and Anngret Simms of 2008 [1] has many insights, including the proposition by Wallace that “urbanism took root in Dublin before the end of the ninth century”, stressing the importance of early property boundaries, though this view was contested by medieval historian H.B. Clarke, who warned that “house plots standing side by side cannot be used as a sole criterion for urban form”. Andrew Kincaid, suggests in his 2006 book [2] that urbanism and architecture arrived with the Anglo-Normans in the twelfth century. It seems that a fuller account of the lineage of Irish urban form would be of interest, particularly given the recent expansion of the areas of Irish studies, urban geography, and the humanities generally here.

Amongst our archaeological sites, Clonmacnoise in particular suggests urbanity with churches located less than three metres apart, facing west, alongside each other. At its peak, it is suggested that up to two thousand people could have lived here, before the rise of Athlone as a crossing point to the north. Almost no above ground evidence of this level of urban density remains, though archaeology has established the urban nature of the place to the extent that the recent draft nomination for inclusion on the World Heritage List is titled “The Monastic City of Clonmacnoise and its Cultural Landscape”. The statement in support of the nomination suggests that, as an urban place, “its dates are relatively early in the chronology of the urban development outside the boundaries of the old Roman Empire”.

On an entirely more modest level, anyone who has studied a rural Ordnance Survey Map will know of historic clachans [3], nucleated groups of farmhouses, which have mainly disappeared over time, but once strongly represented communal and social space in rural Ireland, despite the absence of shops or other service functions. Another spatial manifestation was the handball alley, sometimes located at rural crossroads, and representing public life that was shared and enjoyed locally. Indeed many instances of built crossroads invited social functions over time, even if they have mostly died and rotted back into the ground at this stage.

The appearance, disappearance and re-emergence of the urban condition in unexpected places is not so new here, and may be testament to the fact that the landscape, as well as being intensely inhabited at certain times, and socially and culturally rich, also has the ability to change physically quite quickly in relative terms. Derry O’Connell, at the School of Planning and Environmental Policy at UCD, has undertaken a study of Irish satellite morphotopes, with the morphotope being defined as “the smallest distinct type of morphological region” [4]. He has examined these in relation to the small Irish town, showing somewhat hopeful isolated urban terraces in the countryside for example, or other indicators of urban densities in unexpected locations.

The inference from a quick overview of historic patterns of urban settlement on the island may suggest that a form of ‘Instant Urban’ character, or even a feeling, impression or temporary sensation, might not be unprecedented in our landscape. As parts of our inner cities now start to loose their urbanity, the current challenges include the definitions and evaluation of the quality of the Irish urban condition, wherever it occurs, the understanding by designers and others that these particular formal impressions on the landscape may well melt away over time, and the possibility that in some cases they could even be allowed or planned for as ‘Instant Urban’ for a time, and then removed in a planned way at another time in the future. 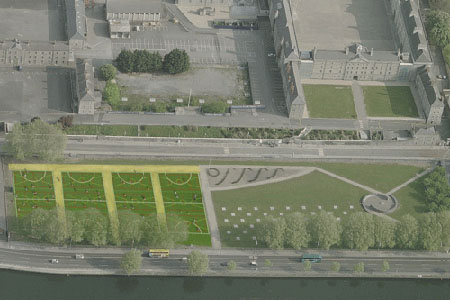 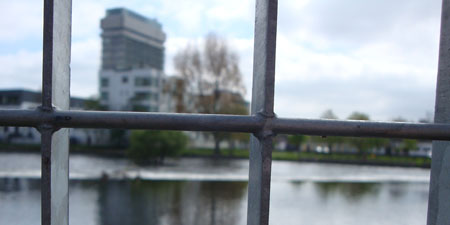 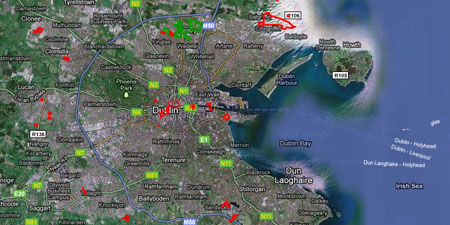 The consolidation of the Urban Forum in Ireland reflects the basic need for multi-disciplinary and inter-disciplinary approaches to management and change in the designed environment here, and joinedup thinking in policy and vision. Initiated by the RIAI, and made up of five key organisations representing construction professionals in Ireland, it has as one of its aims the stimulation of public and political debate on the built environment. However, now that this core concept of the multidisciplinary nature of operating in the broad designed environment is accepted, should we move to discussing leadership roles for appropriately trained architects in this area?

The ongoing professional development of the architect in Ireland has helped to equip the typical member to deal with increasingly complex designed environment situations. From conservation and sustainability specialisations (and others), Irish architects have gained knowledge and experience that has led, in some cases, to international demand for this expertise and an increasing association of the Irish training with innovation and specialist knowledge.

As well as the obvious benefits of acting as architectural designer on real, big projects, which were constructed and occupied in the recent past, many Irish architects working on large projects also gained very valuable leadership experience in the Design Team Leader role. This role includes of contract management, administration and client relations, as well as site experience and general leadership of large complex developments containing collections of buildings, and often infrastructure, landscapes or even whole new built environments.

This broadening of the role of the Irish architect has implications for the Institute, for education and for the client. In the recent past, the debate on the role of the architectural technologist offered the opportunity to give clearer focus to the core requirements for the education of the Irish architect, if only in comparative terms for clarity within the RIAI. Another issue is the consideration of the many architects in Ireland who have only known urban design work experience, (ie. non-detail building design and construction), currently excluded from applying for membership of the Institute. The Swedish Association of Architects (SAR) for example has a broad definition, including interiors, landscape and planning.

The formative undergraduate education of the architect in Ireland has many strengths, including the emphasis on a baseline competence in preparation for architectural practice, and a commitment to architectural design excellence. However, one current challenge is to meet a need for specialization in both undergraduate and post graduate education of the architect related to the broader designed environment. In Holland for example, architects and spatial planners have a common foundation course, leading to separate final qualifications, and are then represented by one institute, the Royal Institute of Dutch Architects (BNA).

It is arguable that a training in spatial thinking at the architectural level or scale is a significant benefit in taking on many key issues related to the designed environment at the scales above, around or beyond architecture, and particularly for urban design commissions. While in fact some urban design scale projects do not result in a ‘projective design’ or what we would conventionally call a design proposal in the architectural sense, most urban design work is concerned with the spatial aspects of an environment, and most are best led by a professional from a background in a spatial discipline. It should also be said that there are some urban design commissions where the leadership role could more usefully be occupied by a professional with training in public consultation, or other relevant areas.

Are there opportunities for the particularities of the definition of the Irish Architect to evolve into, in some cases, the role of Lead Urban Designer ? In an international web of professional definitions, the term ‘urban designer’ could arguably be expanded in this country by architects to encompass the term Lead Urban Designer, with a focus by architects on the dual competencies of Design Team Leader and a design or spatial training, combining to offer a unique role in the leadership of the urban design scale commission.

In the UK, the Urban Design Group (UDG), a respected interdisciplinary British professional forum for scholars and practitioners, introduced a new category of membership of ‘Recognised Practitioner in Urban Design’ in 2007, which could include architects and others. While the UDG has hugely advanced the networks of communication and information in the field of urban design, it is arguably a task for the professional institutes on a national basis to address the role and self-definition of the architect formally in relation to the urban design disciplinary area. There are potentially significant advantages for Irish architects, in employment for example, and professional growth, if the national or cultural definition of the role can be expanded and clarified in this area.

In Ireland, the need for accountability, but also leadership among the professions in relation to “the state we are in”, and particularly in the design and management of the built environment, has never been more evident. 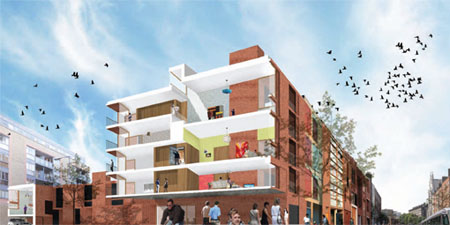 The relevance of theory to the current state of the designed environment in Ireland has not had much debate here, as people maybe feel that speculation or contemplation is a luxury, given the shocking future we are facing as a country. However, detached consideration of issues related to quality and evaluation in architecture and design could have distinctly positive impacts on the economic and social future for the state. The fact that the country has been overseeing the over-building and overproducing of building stock for a long period, does not make Ireland unique. Spain for example, with much greater problems of scale, is now faced with very similar issues. While previous economic collapses – Japan (1986-1991) or Sweden (early 1990s) – oversupply of produced built fabric seems not to have been a major problem, possibly due to tighter controls on building permits, and less easy access to borrowing, the currently engorged building stock in Dubai, USA, Spain and Ireland introduces an unprecedented question for them as entities; when have we built too much? The question is related to issues of presumed constant growth, the Production of Space (from Henri Lefebvre’s book of 1974), and the unsustainable attachment to economies of accumulation.

In relation to our relatively comfortably scaled problem on this island, it would be hoped that the second Government Policy on Architecture (2009-2015) could or should lead us, even if indirectly, to quantify the incidence of architecture in the state, evaluate all existing and proposed development and buildings in architectural and urban design terms, and consider taking away, or Unbuilding, some of the recent inappropriate construction. On 15 January 2009, Morgan Kelly, an economist based at UCD, argued that house prices in Ireland would drop by up to 60% in the near future, and that certain developments would have to be altered or even taken away, in order to restore a properly functioning market. It is possible that there are positives and even new economies in rearranging our designed environment, using what the SAUL School Head, Merritt Bucholz calls “architectural intelligence”.

Urban Agenda examines the context for thinking about taking away, or ‘Unbuilding’ some of the development, which has taken place inappropriately in Ireland in recent years. It deals with definitions, scale, methodologies of analysis, and the economic context for the proposals made. 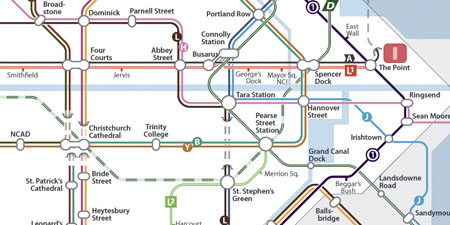 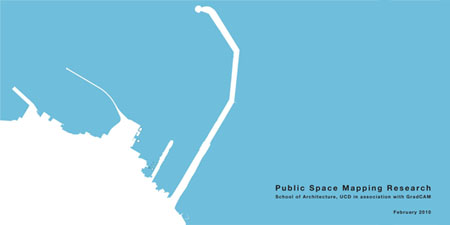 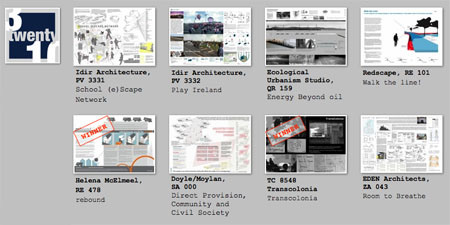